Its been about 16 months since the last major computer purchase arrived at my house. That being said, I long debated on what the next addition to the family would be. First it was an internal discussion on the merits of PS3 versus HTPC (that would be Home Theater Personal Computer). That lasted for about 2 days and went something like this:

“You really like putting computers together… What would be the challenge of simply plugging something in and having it just work?”

“Do you even need anything at all?” 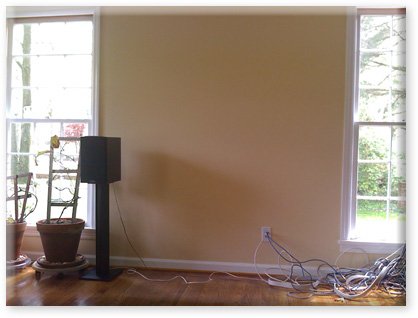 Essentially, C & I picked up a new Sony XBR4 52″ LCD Flat Panel television as part of our 1-year anniversary. Well, more like… I finally was able to sell my Mitsubishi 65″ rear-projection HDTV which seemingly was the only requirement needed to get a new flat panel. After that, the rest of the room just needed to be, ahem… “finished”. Except for making a decision on what stand our mount to pick up (I’m really leaning on a Whalen 52″ Tiered TV Console from, yes… Best Buy – and it’s on sale right now) – the last piece of the puzzle was to find a way to really good HD player without sounding like a cyclone was in the room. (Sorry XBOX360, you’re just too loud for our fancy TV…)

So yes, while we’ve been dazzled with HDTV for some 6 years or so, it was time to tidy up the cables and make a presentable showcase for our Home Theater efforts. So over the next few days (or so, hopefully) – I’ll detail out my efforts to complete a fairly reasonable HTPC equipped enough to handle playback of 1080p Blu ray or just about any other format known to man (I did pickup an HD-DVD drive for my XBOX360 – first time being on the wrong format for sure….)

For the components, I headed to my trusted friend, NewEgg (the best ever…) and placed my order today. What did I choose?

There’s been a lot of great reviews posted about this great motherboard/CPU combination so I’m hoping for some great HDTV performance. No need to any fancy gaming as I leave that to my consoles or my older Dell 9100. I’m just looking at creating a nice, build-to-order Home Theater appliance that is fairly quiet (like my HD TiVo) and works (yes – I’m hoping that HDMI & HDCP just work flawlessly… They better!!) It’s also my first foray into AMD territory… But I’m liking the low power consumption and the quietness that should go along with it…