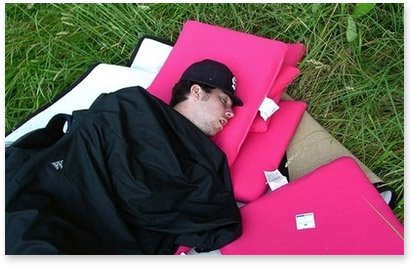 In this photo released by the Monroe Police Department, burglary suspect Kyle Burress is seen sleeping on pillows and pads allegedly stolen from storage containers at a nearby department store July 9, 2008, in Monroe, Wash. Burress was one of two men who were found asleep on apparent stolen goods after they allegedly broke into storage containers at Fred Meyer and left a trail of evidence to where they were found asleep. Police took some photographs before waking and arresting the pair, who have been charged with second-degree theft.