but it seems that our US government has successfully blown up an orbiting satellite in outer space. 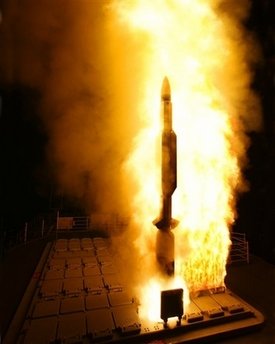 A missile launched from a Navy ship struck a dying U.S. spy satellite passing 130 miles over the Pacific on Wednesday, the Pentagon said.

It was not clear whether the operation succeeded in its main goal of destroying a tank aboard the satellite that carried a toxic fuel that U.S. officials said could pose a hazard to humans if it landed in a populated area.

“Confirmation that the fuel tank has been fragmented should be available within 24 hours,” the Pentagon said in a written statement.

While I’ll be the first to say that blowing up a satellite from a ground-based launch site is quite impressive (knowing that it’s traveling at over 17,000 mph at the same time) – doesn’t that make you wonder a bit about what else they might feel like blowing up in the future? Or now that “we” can do it… would somebody else care to take pot shots at our satellites? I mean – the next time DirecTV has a little signal degradation on their HDTV channels somebody might feel like taking some action!