On my nightly news parsing, I wandered across a news article about pickpocketing…

Bill Barnes says he was scratching off a losing $2 lottery ticket inside a gas station when he felt a hand slip into his front-left pants pocket, where he had $300 in cash.

He immediately grabbed the person’s wrist with his left hand and started throwing punches with his right, landing six or seven blows before a store manager intervened.

“I guess he thought I was an easy mark,” Barnes, 72, told The Grand Rapids Press for a story Tuesday.

He’s anything but an easy mark: Barnes served in the Marines, was an accomplished Golden Gloves boxer and retired after 20 years as an iron worker.

Barnes said he had just withdrawn the money from a bank machine and put it in the pocket of his shorts before driving to the Marathon service station and Next Door Food Store in Comstock park, a Grand Rapids suburb.

He remembers noticing a patron acting suspiciously, asking the price of different brands of cigarettes and other items. While turned away, Barnes felt the hand in his pocket, so he took action.

“I guess I acted on instinct,” he said.

Kent County sheriff’s deputies said the store manager quickly came around the counter. The three of them struggled through the front door, where two witnesses said the manager slammed Rae to the ground and held him there.

“There was blood everywhere,” said another manager on duty, Abby Ostrom, 25.

Barnes was a regional runner-up in Golden Gloves competition in the novice and open divisions before enlisting in the Marines in 1956.

He lived most of his adult life in Comstock Park with his wife, Patricia, before recently moving to Ottawa County. The couple have three children.

After retiring as an iron worker, he now works part-time as a starter at a golf course.

Barnes said he’d probably do the same thing again under the same circumstances, if for no other reason than what he would face back home.

“I wouldn’t want my wife to give me hell for lettin’ that guy get my money,” he said with a smile.

While this story is a nice tale, I had to ask myself, “What is a golf starter?” And I found:

The starter maintains the starting times and tee sheet, and ensures that golfers get off the first tee in a prompt and orderly manner. This job is crucial in keeping the tee times on time. Starters must possess excellent interpersonal skills and be able to handle customers in a friendly and courteous manner. Starters also are very important in making sure that customers have properly paid for their round. The starter also helps golfers find a game if they are by themselves. The starter also is an important part of making sure customers will have a pleasant golfing experience.

Can you imagine if you caused him to start a round late? Or what if you didn’t like his “interpersonal skills”?

Hope you have a pleasant golfing experience! 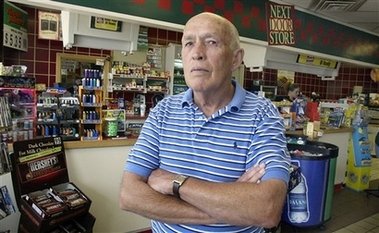