Since I was poking around in my computer BIOS over the last few days during a rebuild of my Dell desktop back and forth from Windows XP & Vista – I thought that I’d partake in a quick experiment to see exactly how much of a performance difference turning on or off Automatic Acoustic Management would be. I’ve always had it enabled since I did my first install a few years back, but since I use this Dell 9100 for both my project studio as well as my day-to-day Web surfing/Home office computer – silence is golden! So a few things first…

So what did I find out?

With AAM turned on:

With AAM turned off: 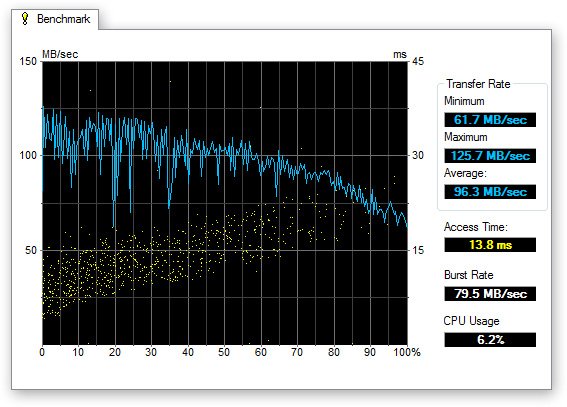 My 5 minute conclusion would lean towards obviously slower access times – but in the real world? Not a lot… A tad noticeably slower – but I’m mostly interested in bandwidth transfer (after all, it’s a RAID 0 SATA configuration in the first place…) since the real workload is digital audio. In my case, I’m keeping the acoustic management turned on since it’s an audible difference for sure.

For grins, though – I decided to give my custom built ASUS media server a run with the same benchmark (it’s in the basement so hard drive noise doesn’t matter…) 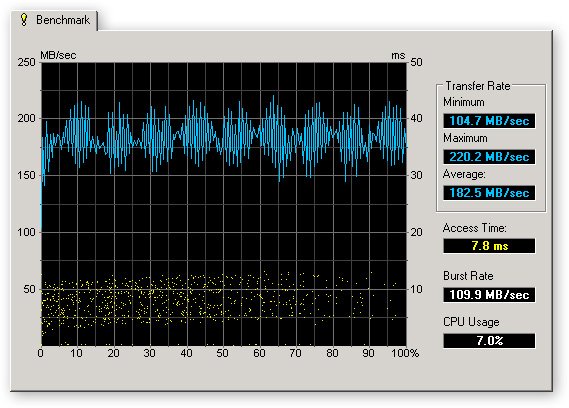 Whew… Maybe I should bring it out of the basement and swap it with my desktop! Almost twice as fast transfer rates and access times! And it doesn’t seem to trail off in performance at the edges of the drives… (Okay, yeah – I said drives… It’s also a RAID 0 setup, but with 4 SATA drives!) And who said motherboard RAID didn’t perform? I’m pretty happy with my 220 MB/sec peak transfer rates… (With an 8MB block size it went up to 323 MB/sec!)