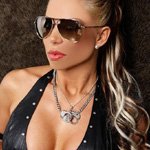 I’ve been listening to XM Radio since 2005… Mostly since it came with my Acura TL and for the last 3 years, I’ve renewed in in my RL as well. Especially helpful considering that for the last four years I’ve been able to use the “I want the $77 for 12 month deal” to keep its costs inline. However, most of the time I’m listening to MP3 CDs so XM is only really helpful for longer road trips with my wife (she loves the 70’s station) and before XM pulled the plug on E!

The crux of this story is more related to a few weeks ago while I was flipping around on my 12 XM presets. I hit on BPM long enough to grab a listen to “I’m Done With The Pain” and was mesmerized by the bass line. Love the sine-wave bass lines.

So while finding anything on John Kano proved minimal, at least there’s a somewhat cheesy video of this song on YouTube:

Along with my own song sample:

Granted – more focused on Sarah Mattea than John Kano (heck – even the image on here is of Sarah!) – hopefully you’ll feel the need to add this track to your collection…