So this place called the Heart Attack Grill comes out with some burgers a few months ago that are essential the “Greatest Burger Ever Made” (well – I made that up…). The waitresses dress like nurses (skimpy in that manner – like girls on Halloween!). And now real nurses are complaining about their outfits. You think they’d complain about the burgers!

The waitresses wear skimpy, cleavage-baring outfits, high heels and thigh-high stockings — a male fantasy that some nursing organizations say is an insult to the profession.

Well, the point of this randomness of a post isn’t about who’s complaining about death, burgers and short nursing outfits, it’s about this picture: 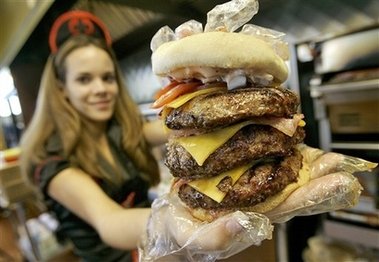 Yeah… I guess I could like that too… But it’s still about the burger!